Shallal Studio – Day Two
The tallest rainbow I have ever seen greeted me as I drove through Marazion on the way to the studio and it was an indication of the day we would have, a tricky start but a productive day nonetheless, a metaphorical mixture of showers and sunshine.
Sam, Zoe and I arrived at the desk at John Daniel’s Centre to sign in. Toby wasn’t able to be with us this week. A confusion of communication meant that we hadn’t been told that we were unable to use the studio because of a day-long meeting in the neighbouring room. We were offered an apology and the resources room to work in and given five minutes to grab what we needed from the studio before the meeting began. Zoe, whom I am learning is also gifted in organisational skills as well as everything else she does, helped me think of what we needed and put it all in an easily carried box which meant we had enough of the important things (including tea, coffee and the kettle!).
Sam decided to work with the Derwent pastels and produced a beautiful abstract drawing and Zoe was working with the Derwent Aquatone pencils on a landscape drawing/painting of a Scottish landscape. By lunchtime we were feeling a bit cooped up so we took our chairs and packed lunches out onto the grass into which our chair legs sunk about six inches when we sat on them, so we retreated to the path (we removed the plugs of grassy earth from the chair legs later!).
After lunch, Zoe finished her landscape and began work on a pastel drawing of irises while Sam worked on a pastel drawing of two houses being towed down a road by big orange JCB’s. I became absorbed in a collage/drawing. At about 2pm we were told we could return to the studio, so we packed up and spent the last bit of time reclaiming the space as ours and reorganising the tables for next week with a work station each and a big open space in the middle for refreshment breaks and a dreaming Raindrop! Diana appeared again – lovely to se her – bringing some Christmas cards for me and a pack for Zoe as a thank you for her seagull king depicted on it. Christmas cards are available in aid of Shallal at a cost of £3.50 for a pack of 10 (+P&P). Please email  admin@shallal.org.uk if you would like some. 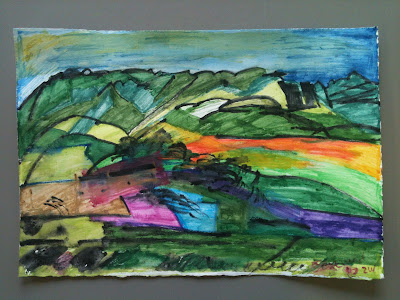 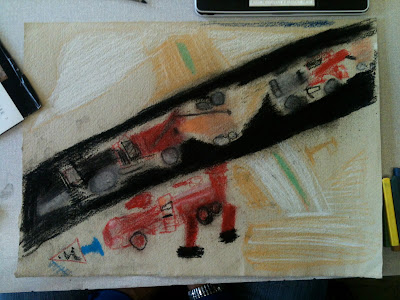 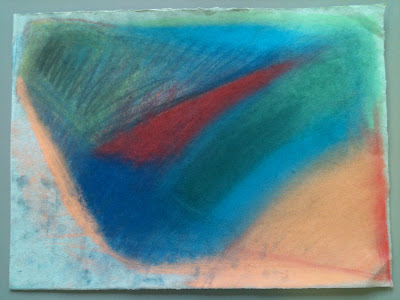 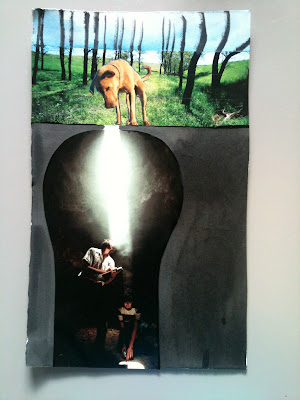 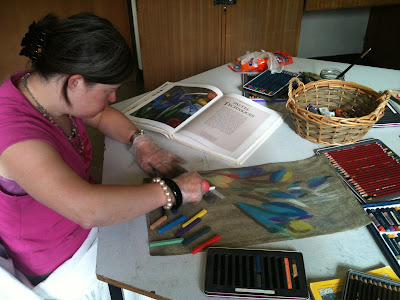 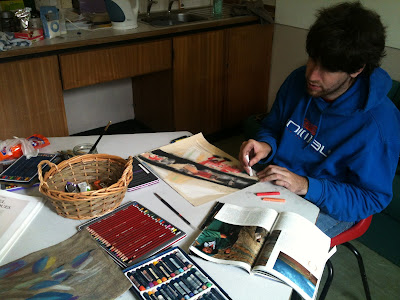