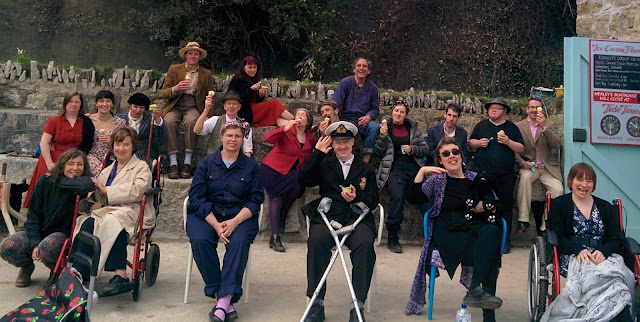 A grand day out!
The Cornish March weather was kind to us, the steep sloping, glorious bejewelled ( with flowers) spring valley sheltered us and the warm sunshine meant that James the film maker had to wait for the gentle cloud covering he preferred.
It all came together on the day, aided by the offer of the rail of costumes - much appreciated, and so we set forth: comedy by the pond ( not sure it will get into the final edit) but it was good! then the beautiful pale blue bridge and vistas, then the beach, 'o joy of joys',  Sorrowful Song ( i'm on a requiem theme now?! have been learning The Wayfaring Stranger). It looked so strong and beautiful ( hard to find the correct adjectives - but i was very pleased with it), it gave us 10 mins Embodied Space improv on the beach, ( great new project R&D, as was it all, working in well along with the filming).
Harry Theaker joined in with us all day something he and we have always wanted and now we have such a good starting point for his continued input. We are grateful to have his support on the film and now we also have it in Here and Now, so we hope to skype, share film and have lovely arty chats!!!

Many thanks to Chris Hibbert who originally wanted us involved and to:
Sara Waller - dance project and more
James Stuart - Lightbox Films
Guy Watson - Trebah Gardens Ampi theatre and events co-ordinator
and all who helped on the day.

The access was a challenge, so we were thrilled to invite Kerry T back to help us in a supporting role, assisted by George.
Thoughts from the week include.....................

Three sets of last lines
Joy is not made to be a crumb.  *
...still ready, beyond all else,
to dance for the world.  **
Let me keep my distance, always, from those
who think they have the answers.
Let me keep company always with those who say
"Look!" and laugh in astonishment,
and bow their heads.  ***

***-this is one of the pleasures for me of working with others in Shallal, alongside the profound fun of gestural communication and humour. Thank you all x 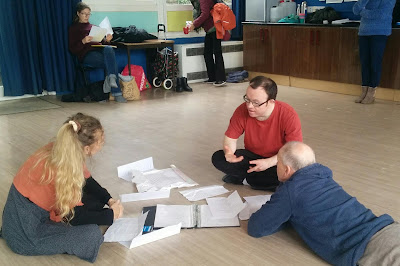 Excited for the first of Thomas's time today.
I am constantly surprised by peoples talent and vision. I already enjoy watching Thomas's talent in our weekly sessions but with this opportunity I see even more: poetry, theatre, art, spoken word, music connections, vision.
Thomas is here discussing his poems with Janice and Colin, and how to work with them - strong work can't wait to watch it develop.

Travelling meeting with Lou and Colin yesterday.
* Friday is the start of our new ACE funded Here and Now Project for Shallal         Dance Theatre: building audience, opportunity, experience, venues.
*Shallal 2 also have first new funding in - thank you again to Lou - it will enable    our new project.
* Commission: a short film to be made at Trebah Gardens, looking forward to mentoring by dear Harry Theaker and working with James from Lightbox. As usual my struggle with heritage - and i need not worry as there is so much talent and knowledge around, (Jo L works with heritage at Cornwall Museum) great ideas coming in and warm local anecdotal ones ( Debbie has a wealth of local stories/connections) and Harry also has a story so look forward to creating with all of that over the coming week.


Eddie's Art at London Charity Gala!!
Thrilled for him, it deserves a wide audience.
Pleased to have Eddie back with us at Shallal 2. 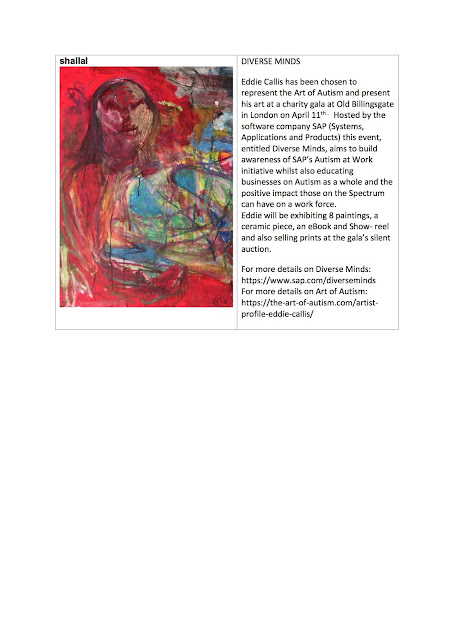 
Hear My Voice at Falmouth Library

Peer group feedback really appreciated, as Lou write the bid!
"the show last night about suffragettes in Cornwall was so wonderful, so many really important issues brought to light in such a creative and expressive way without being the least bit preachy. There was no hammering home of issues, instead the invitation to think about things, which is so much more powerful."

Liskeard....
More excitement now we can advertise this...
I love their work so really looking forward to it.... 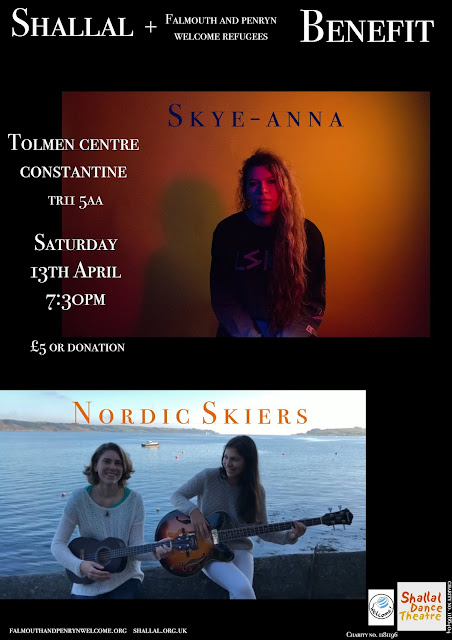 Audience comments from 'Hear My Voice' at Falmouth Library

"I found this powerful and very moving.
Loved watching it - thank you"

"A moving way to be reminded of such recent history. Powerful"

"I loved the personal story set against the larger picture.
Lovely, heart-felt performances and stirring words.
Thank you"
x

"Amazing performance - what powerful writing  and movement - loved the balance between the forms.
Very moving and the personal element makes it all the stronger.
Loved it and so important to tell the story.
But we still have a long way to go on the equality for all journey.
Fight on"
Maz x

"Thank you for tonight. You all really touched my heart,
certainly a celebration of diversity, ability and community.-
I too remember the workhouse here in Falmouth at Union Corner. My mother (born 1911) often told me of the situation of poverty, disadvantage, suffering of impoverished women, in her case, her mother a widow left with no income of her own.
Your expression through dance, music, the spoken word, signing, gesture - beautiful.
Thank you all - you are indeed reaching out to the community in such a positive beautiful way.
An evening to remember!"


Our love to those performers who weren't able to be with us today for various reasons.
Well done to those who performed.
Thank you to Henrietta and Sara at Falmouth Town Council for hosting us, and to Jo L for suggesting it!
To our audience approx 50, we really value the conversations/connections and comments.
To Martha for coming to film it and to Lou who helped her and without whom we wouldn't have made this piece of work, as she wrote the bid for us which was successful.
Art speaks and today i found more layers of why i like it so much - i could say more but hopefully you will get to see it so don't want to spoilt it.

Good news this week that we have our Arts Council Funding, (thanks again to Lou) for Shallal Dance Theatre, more news and performance dates and venues for the coming year out soon!

Programme by Jo Lumber for "Hear My Voice"


The wealth of talent. Jo L offered to write this for us and here it is a programme/information for 'Hear My Voice,' Jo also came up with the title.

Extracts of Spoken Word
‘Our feet may be small but we stand tall together.
We shall march over miles so our strength can be seen.
Our voices have been stifled and silenced,
But now we project our opinions with conviction.
And we will continue until you take notice and take action.

Shall I speak louder?
Support the women’s suffrage movement.
Hear our voice, for we matter.’  Jo Lumber
‘I’m married’ he said, nothing to be done. His wife was also pregnant. I was cast aside, restricted by invisible chains wrought by fear and judgement.  The workhouse beckoned. The workhouse- you had to apply to enter, tell them about how you got pregnant, every detail, like you weren’t humiliated enough.’ Debbie O’Nyons

‘Listen, you can still hear the sounds of women’s shoes,
marching, tramping,
stepping onwards through the years.
Sisters, don’t forget to tell your daughters,
sons as well,

of the journey that they trod,
our feet still dancing to that beat,
wanting to be counted one by one.’ Elaine Stammers

Background information
We were given the task of creating a performance piece to commemorate the 100th anniversary of the first group of women to obtain the vote. Many of us were aware of the upcoming centenary in December 2018, as it had generated much press coverage, termed the 1918 Representation of the People Act. But what we didn’t know was that just a small amount of women were given this right. Those women were over thirty years of age, registered property holders, or the wives of men who were registered property owners. Despite this elitist invitation favouring just the privileged in society, it was a positive step forward for women. There was change for the male population too. Now, all men aged over the age of 21, regardless of class, were allowed to vote.
This change was highly influenced by the loss of so many men in the First World War, for In 1910 just 60 per cent of men were eligible to vote, based on wealth and status.

It had taken decades of determination to reach this point; The National Society for Women’s Suffrage had begun in 1872. Women throughout the country rallied together in solidarity for the cause. Cornish women undertook a gruelling and powerful mission known as ‘The Great Suffragists Pilgrimage March’ from Lands End to London in 1913.  There were two movements, with differing approaches, campaigning for all women to have the vote, plus other issues of social justice such as child poverty and poor working conditions.

The Suffragettes
The Women’s Social and Political Union favoured direct action to force the issue of votes for women. They chose to use drastic measures including vandalism of property and hunger strike in prison, to draw attention to the injustice that allowed the law to be based upon the views of men only.  ‘The Suffragettes’ were known through Emmeline Pankhurst, who when imprisoned for her actions saw it as publicity for the cause, and Emily Davison, who died on Derby Day 1913 when she stepped boldly onto the race track. The Suffragettes wore sashes and ribbons in green, purple and white.

The Suffragists
The National Union of Women’s Suffrage Societies, ‘The Suffragists’, championed the continuation of non-violent protests and petitions that had started in the 1870s. They used peaceful tactics; rallies, marches and petitions. Millicent Fawcett was the face of The Suffragists. Their colours of identity were red, green and white.
It took a further ten years for all women over the age of 21 to be granted the right to vote in 1928.
Jo Lumber

HEAR OUR VOICE, FOR WE MATTER
Special thanks to: Delpha Hudson and The Hypatia Trust for research information and support, St Peters Church Hall in Newlyn, Henrietta Boex, Sara Baistrocchi, Falmouth Town Council and Lou Brett.

The name is Cornish -  meaning a celebration, usually a wedding, when a musical procession was created with people banging pots and pans.
It was adopted by the company because of its celebratory meaning.
by
Diana Morris our first (voluntary) administrator and mentor on people politics.
She was Newlyn Art Gallery's first Education outreach officer.

The name was suggested by Anna Marie Murphy, who went on to work with Kneehigh and be a highly successful writer, performer, workshop leader etc
http://voicesofcornwall.co.uk/annamaria-murphy/

I have often been asked if Shallal is an Arabic word and i recently discovered there is the same word which means waterfall.

Shallal-band.................. Clashing of tin pans to serenade newly-weds
http://www.cornishpasties.org.uk/Cornish_dialect_dictionary.htm
tidying up and finding stuff! such as these first posters

wandering around the internet checking facts and found this!
http://www.bbc.co.uk/cornwall/content/articles/2009/09/16/people_zoewilton_feature.shtml
from 9 years ago..
It is nearly a year ago since Marjorie's passing ( 18 March 2018) and again we remember how much she gave us all.
Posted by Shallal at 04:14 No comments: