There is a lot to share from last night. I am waiting for photos to arrive from others and our camera. Ever since I have had close Russian friends I am impressed by their quality of soul and hospitality and yesterday was no exception although somehow in my nerves I had forgotten that and not expected it in work?! But of course artists who want to share and reach others have it in abundance.
They constantly help and support each other joyfully.
Olga and Marsha who we are staying with have run us around through intense traffic jams! Fed us, showed us sights etc.Yesterday they got us there, we are 1-2 hours outside the centre! Before that they arranged for us to be shown around 2 incredible exhibitions, one life changing! a retrospective of an amazing famous Russian artist, ' all my life I wanted to paint the light of the sun' but was haunted by 'the fury of war'.
/https://www.tretyakovgallery.ru/en/exhibitions/vasiliy-vereshchagin/

Thanks to: Sophia and Alla who invited us, Olga who made the connections, hosted us and so much more along with Marsha, who then asked Nicholas who came and helped with computer set up, Malena translated for the talk for free and continued translating well into the night as Alexis had many of us back to his flat to celebrate, meet and carry on the conversations, complete with toasts and famous Russian hospitality!!
They often live in small spaces but have big hearts, everyone fits in.

Now I am up early my head is racing, how we can continue this wonderful exchange? that is full of potential.

(Some of the reality for people with support needs here is sobering, it sounds as if when your parents die the only option is state provision/ care and there is little or no help for families i.e. disabilty allowance, carers support etc.)

The exhibition was lovely and the film made about their year long project creating it was delightful.


My presents from last night.
Painting, film survey, gallery guide, and catalogue from their exhibition. 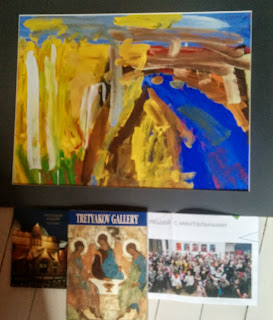 Hurray I'm into the blog!
I have brought the Shallal iPad with me which is proving easier than a smart phone for many things!
So the last chance to prepare my talk/presentation and yesterday I realised I will have to prepare but also improvise, slightly scary through an interpreter but here goes....
Anna has helped create a PowerPoint and I have the support of many short films most of which were made by or with Barbara Santi of Awen. These and 2 potential running orders should be enough scaffolding to build the talk on, we hope. I wouldn't be worried if just talking about the art and people but it's the background structure and detail which could require exact detail and amounts. My son immediately asked how many people do you work with? so maybe I need to add up a bit ..I'm not a statistics person..

So I have at last found a link and it looks like the venuehttps://www.tretyakovgallery.ru/en/for-visitors/museums/kulturnyy-tsentr-v-tolmachakh/

Our friends are very supportive and we need to check the memory stick works?! Small glitches!!
I look forward to meeting them afterwards as Q&A is hopefully easier.

I come with all the wonderful artists and people who make up Shallal in my head and heart so just hope to do them justice or at least not fail!!
The films can pay tribute to them ....if my part doesn't live up to it.

Home on Wednesday for work, standing in for Debs at Express Yourself and Friends and Dancing this term, and someone coming in to talk about growing sunflowers?! I think at the end of Shallal 2. First one of the summer term at Liskeard and Thomas has kindly written about the group for the Liskereet Centre newsletter and 2 shows of Ladders and  Footprints on Friday.
This weekend  though a short Russian holiday, the Kremlin - inside its walls are amazing cathedrals and wall paintings- and Zagorsk are on the itinerary...

Faces feedback, getting ready for Moscow, 2 shows on 27th, Studio equipment and Film Showing in June

"So very beautiful, loved all the paintings/portraits as a backdrop, a lovely mix of smiles and tears, and laughter. Thank you."

"Well done to the Shallal performers and Jo Willis for a truly gorgeous performance at Falmouth Gallery tonight. I really enjoyed watching you all perform with real intention and personality."
Suzie West Spindrift dance 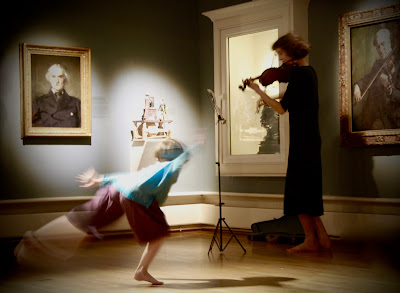 Everyone in Shallal 2 said how it helped them bond as a group, as we have 4 new members, and were really pleased to have performed. The portraits made a rich and wonderful inspiration and backdrop....
Thanks again to Falmouth Art Gallery for their unstinting support.

I have/had a good memory which is a blessing and a curse, i know i have that photo somewhere.... but then i am am fairly untidy so where? it always could be one of 3 places and do i spend time on finding it....
I'm up early blogging to keep this like a diary, it is so useful to look back on..and to keep chipping away at Moscow presentation, there are soooo many wonderful images of the work and so much to be talked, about but they want hard facts and figures, which will be so different to their organisation but the exchange of information will hopefully be very insightful for both of us...
I'm searching for an old trustee photo...

The question of funding is beginning to encroach as ever --- bother---- despite our good intentions we could face a gap and my mid life crisis sometimes asks me why i never got a 'proper ' job especially with a large family, now 4 of them are flying the nest! they could do with some support...
We've kept going before and it's worked out...so on we go again.
Many thanks to all those working hard behind the scenes to keep everything going, we now have a funding group which meets regularly.
I asked a question of "who has secure work?" at AHSW 2015 gathering in Bristol and only one person in the room of about 30 professionals, artists, producers etc had a contract of longer than a year!
I will have my travel and visa paid for but there is no funds for making the presentation, giving it or  the time away..... 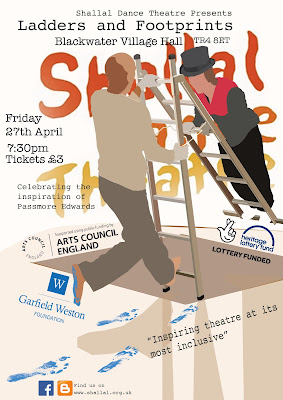 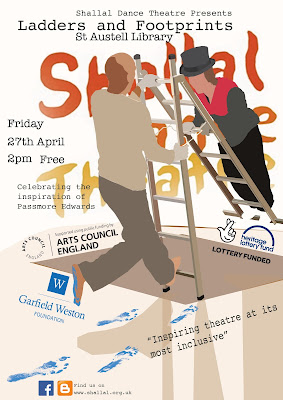 St Austell library is a light and airy, fairly spacious 60's building with grass outside and Blackwater Village Hall is 'bijou' intimate, but lovely to take the show to Passmore Edwards home village, birthplace! Thank you to Dean.

Next thing is to sort our new studio......
and start planning a Summer Studio timetable.
Congratulations to Lou for successfully fundraising for equipment! we plan to offer 2 printmaking workshops with Lou, one in July one in September...
and am looking forward to the view and the space, thank you to Nigel and Helena.

Shallal – Celebration in Film
Friday 22 June
11am
Newlyn Filmhouse
Donations on the door
Join us to celebrate the completion of Cornish Doorways project with the films produced over the 3 years plus some classic Shallal shorts.
The short films :
Cornish Doorways evaluation film
Passmore Hats
Falmouth show film
Shallal – making an almighty din
Tranquility
Duchess and the Doll film
Duchess, the doll and the dog animation
Trevor Film
The Crows
Moving Words Nancealverne School
The Wild
Tree poem
What is Inclusive Dance?
Ghosts of Godolphin
Thanks to Barbara who is organising all of this.
Fundraiser and Sharing afterwards at St Peters Hall ( across the road) we will hold a ( last?) exhibition of Art work created in the Doorways project along with refreshments and performances created in memory of Marjorie, Skye has said she will play! so a chance to hear her for those who missed the benefit at Falmouth Art Gallery.
Oh and great to have Kerry Tomlinson onboard with the Shallal Sketchbooks. We hope to build and continue the momentum of all the good work Victoria has done over the past 2 years in partnership with Falmouth Art Gallery. So onwards with Victoria and Kerry with support from Lou and myself in the background and thanks to Lou for all the fund raising for the success of it so far and to Henrietta and all at Cornwall museums and libraries.

I wrote 3 things inspired by Marjorie and this was the last,  which i read at St Peters Church at the Celebration of her life, before members of Shallal danced to George's music....

Our faith informs our lives.

When I first met Marjorie I probably had just been received into the Russian Orthodox Church. Marjorie was atheist, nearly communist, she didn’t believe. But her faith, her love, the gift of Life in her children and final child Zoe was her faith and in her heart, and she found God in the darkness of grief when Roy died and she never left Him.

She took to going to church as if she had never not been.

It is also a testimony to the community of St Peter’s that Marjorie found such a loyal supportive church family, such close good friends.

Marjorie’s faith in that way is still an incredible testimony to me and her righteous anger. I started writing something about how we bonded in our anger and thought that didn’t sound very positive so halted,* however we did, we talked, we supported each other in our belief in the talents and personality and gifts of those we loved.

Shallal is symbiotic it gives back what you give to it.
Marjorie gave us this straight talking, honest, consistent, dedicated, sensitive and talented support.

In giving thanks for Marjorie and celebrating her I also want to give thanks and celebrate this community. I know she felt the loss of those in the parish who died and I know you will miss her, we all will.

However one last word, Marjorie gave Zoe fantastic coping skills to help her love and remember and dedicate things in her life to her father Roy.
Zoe immediately started doing that for Marjorie, so her legacy flourishes and that informed by her active Christian faith makes Zoe strong and wonderful as we know she is.


second piece of writing - which i didn't read out...

When I first met Marjorie she was quite rightly angry, so was I, we bonded over that.*
Angry about how people ( with learning disabilities LD) were treated, angry about the limited opportunities, patronising, dismissive attitudes. Angry that ( some ) people said that people who happened to be born with a LD had no potential and very little choice.
We take it for granted now that our children ( with 'disablities' ) live with us, but Marjorie’s generation were encouraged to put their babies/children straight into care. I worked with people who lived in one such institution I was also angry, upset, frustrated!
She was one of the forerunners making the trail easier for parents of children with support needs who came after her.
It hurt and it hurt and society had to be prepared to do battle with her.
She often mentioned about when people in Shallal received applause, that originally it wasn’t something they were used to and she also mentioned the choices and opportunities Shallal gave to Zoe and others.