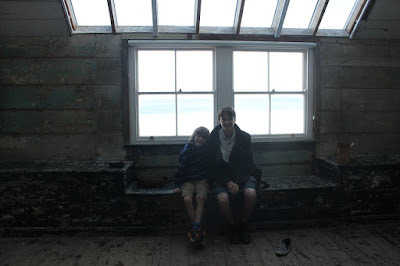 My helpers Luke and Michael in the early morning!
Doesn't seem a year ago we were there in residency at Studio 11, and Jo L in Shallal 2 still remembers performing in Studio 5 as a highlight ( Anna doesn't agree as i sprung a final unexpected dance on her!)

Shallal is an inclusive arts charity based in Cornwall. It started over twenty five years ago with an inclusive community dance theatre company and became a charity in 2005. Shallal runs ongoing community groups, specialist sessions and a main dance theatre company.
The Shallal Studios Residency at Porthmeor in 2015 concluded with an amazing dance performance in Studio 5 at the end of September, and this beautiful collection of photographs by Andy Parker is a reminder of this performance.

Photographer Andy Parker became part of Shallal Dance Theatre's life over a span of two to three years, and his images capture moments of rehearsal and performances of "one of most visionary inclusive dance theatre companies in the country" (Rory Mcdermott, BBC Community Arts Fund).

Shallal Creative Director Jo Willis commented "We all loved working with Andy. He brought a shared enthusiasm and generosity to all he did, and this is a reflection of Shallal's work seen through his eyes".

Andy Parker said “My best hope is that by exposing my work to the public will to help to promote a greater understanding, compassion and acceptance within our community, and the achievements to be gained from social inclusiveness.” He added “I believe that nothing can substitute the traditional hand crafted print produced in the darkroom, with its impossibility of exact repeatability, and the inevitability of every print possessing subtle differences no matter how small. Looking at an analogue print is to witness something that does not exist in exactly the same way anywhere else. Each finished print is as singular and as unique as the person or object within the picture.”

Shallal Studios is the new visual arts branch of the charity, Shallal. It aims to raise the glass ceiling encountered by talented visual artists who have support needs and to provide a space for talented emerging artists and artists who like to work in an inclusive environment.
During summer 2015 Shallal Studios enjoyed a three month residency at Porthmeor Studio 11. Shallal had identified visual artists of genuine talent who faced barriers to progressing their art practice, and this residency provided vulnerable artists with the opportunity to work alongside emerging or established professional artists and collaborate with them in a culture of mutual creative benefit.

Artist Lou Brett who helped to manage the project commented “The residency afforded artists of all kinds the time, space and materials required for them to move their art practice forward. For most artists this was connected to taking risks and overcoming psychological barriers which had limited them in terms of medium and subject matter. Many artists with additional needs have extremely limited opportunities to take creative ideas forward, so opening this door offered by Porthmeor was quite profound for them.”

Shallal took part in September 2015 Open Studios where their studio attracted considerable public interest, and the residency concluded with an exhibition at Falmouth Art Gallery in early 2016. The works have now seen by large numbers of people, raising the profile of work by an inclusive studio. The residency also acted as a valuable pilot project. Shallal Studios currently has no permanent studio space and the time at Porthmeor was spent testing out and evaluating how an inclusive studio would work, providing essential facts and figures as well as evidence for future funding partners. 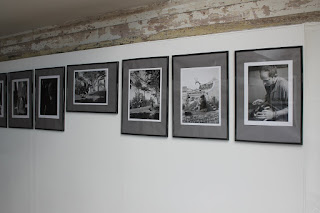 
The gallery was packed for Sam's Private View and Shallal 2 showed some recent work:
"A captivating performance which was a pleasure to watch - thank you"
"Inventive as usual. A lovely evening of creative dance"
some photos on FB.

Sam's work is beautiful, the colours and shapes are "vibrant yet calm."
Art allows you to look at the world, in other ways/through other eyes, and Sam's work does that roads, boats, paths, sand castles and streets were laid out before us.

Many people came to see the show and we hope it will be the first of many by Sam and other artists associated with Shallal Studios.

Our next Footprints Residency will have a show there at the beginning of January.

I then went deep into Back Lane West planning and Laura has funding to share her painting process, The sketchbooks are going to be revamped into cross art form installation art! Jo Lumber has poetic ideas for the space and performance/interaction inspired by Passmore Edwards convalescent homes, Delpha likes writing on things and more to come!! Application written and draft timetable in place now.

Well done to Shallal 2, a lot of praise and positive feedback! and on to the next thing! we always want to do more once we start....
The next thing has just been funded! "hurray"and the new challenge for Shallal 2 to respond to Wheal Martyn and the China Clay story. http://www.wheal-martyn.com/
I recently had a meeting with Jan and then walked around some of the site, it is fascinating and i look forward to it.
We have a trip to research it on 28th September.
For light reading and inspiration i reread "Jack Clemo A Love Story" while on holiday. http://www.wheal-martyn.com/page.php?page=exhibitions
His life is amazing and inspiring.

Next term is full of inspiration (which might be quite daunting) as Passmore Edwards and Jack Clemo were both visionaries in their own time and way.
Posted by Shallal at 00:16 No comments:

needing to title the Back Lane West Residency before i wrote our ACE application
We are all so inspired by Passmore Edwards, "Why isn't his story taught in Cornish schools", many have asked!

What do you leave behind you? legacy? ladders are also part of his images

A Few Footprints is his autobiography

Political and social reformer, politician, peace activist, and anti-slavery campaigner he became one of the most successful newspaper proprietors of his time.  Born in a small Cornish village and educated at the local dame school, he had an ambition “to be useful”; an ambition that remained with him throughout his life. Early attempts at publishing led to bankruptcy but through hard work he repaid his creditors in full. Disillusioned by Parliament (representing Salisbury 1880-1885) he redistributed the wealth that he had earned by funding the building of more than 70 public buildings; libraries, hospitals, convalescent homes, schools, art galleries and museums; to help those he considered he had a responsibility to assist.  He twice turned down a Knighthood and died at home, 51 Netherhall Gardens.
http://www.londonremembers.com/subjects/john-passmore-edwards

There isn't much space left on the residency but if you are interested please contact us as we would love to hear from you.
admin@shallal.org.uk
Posted by Shallal at 23:44 No comments: