Well, a fun day last Friday in the main company with lots of exciting "play/open space" after a good warm up with seasonal but obscure music, we went on to play - my favourite- ..i gave them a 3 min exercise, no music, open improvisation structure, and (none of us are sure how long) it was extended to, 20 mins at least, as everyone played! no great dictator - music - just the fun of it and the opportunity to be yourself, extend yourself, work to your own rhythm, be sparked by others creativity and ideas, no end product needed. We talked quickly about it at the end, you could write a thesis on this work and people do / have, but it really suits us, and we have been so busy the last year that we have enjoyed freedom to play.
We finished early for our Christmas party (this time in Newlyn) and everyone from the main company was there!

Our Christmas photo is one by Zoe on her fantastic new camera, a prize from a competition. 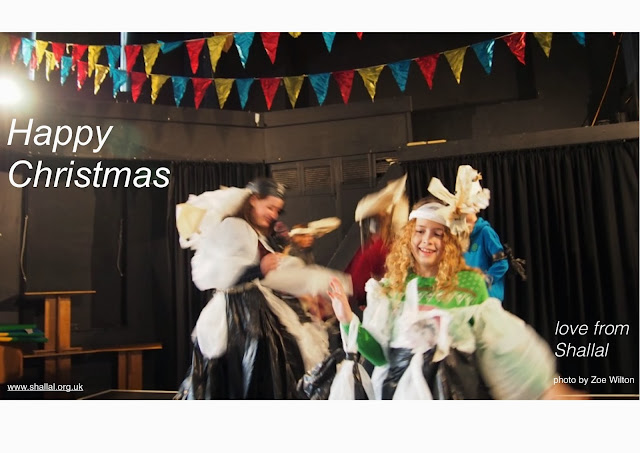 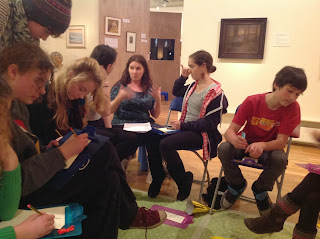 last some images from Moving Words second session and next time we will have Barbara with us! 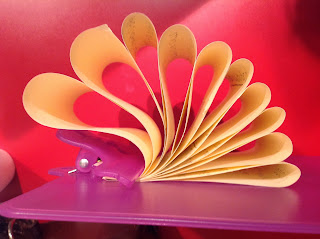 Thank you to everyone for their fantastic support this year, it has been busy and rich in variety, and we hope next year will be the same, with many interesting projects on the horizon, and a commitment to maintaining all that is good.
We always build projects and groups from the ground up: developing the ideas, needs, passions, inspiration of those we know and work with and those we hope to reach!
So here's to continuing! and many thanks to Colin who dropped in on Monday and talked about the beliefs and ethos behind the work for him!
Posted by Shallal at 22:53 No comments:

a week in pic stitch

Some of my week captured in pic stitch!

Sometime ago i posted an essay by Jamie Moran about the film Pina.
Now i would like to post something written by his wife Mayfanwy an impressive and remarkable woman and it is good to hear her voice.

I am in my ninety second year, so I have seen several generations pass since I was born. I grew up in several countries and different cultures, all of which gave me something that I remember with gratitude. A strength in my heart against the blows of life. In later years I have met other peoples from the mountains of Tibet to the jungles of New Guinea, and what has always rejoiced me is the similar character of all common humanity. Kindness, hospitality, family life, generosity with what they have; and their pursuit of the sacred in whatever shape it has been shown to them. This is the ‘highest common factor’ that unites us all.
Time passes and things change. Man has discovered that the resources of the earth are finite and that we can use them up and destroy the animals. Global Warming accentuates the violent face nature can show us when disturbed.
Since my youth man has created the atom bomb and gone to the moon; played with dangerous powers of destruction, inherently irreversible.
Most striking is all the various new forms of communicating that have drawn the whole world together. We have learnt the pleasures and sorrows of others far away. History has revealed many wrongs and injustices that have been wrought over time between nations, that cry out for redress. This has polarized us. On the one hand, there are those who listen and try to heal the wounds. On the other, there are those who demand vengeance for their wrongs.
People move from continent to continent, and now we have multi-cultural societies thrown together, and what will be the result? In some quarters there is a growing lack of respect, and without respect nothing flourishes. Respect for parents, respect for the opposite sex, respect for the innocent souls of our children. There is growing disrespect for the people in society who are doing their best to look after us, sometimes inadequately.
Do we want a mishmash society, without beliefs, without roots, whose only commonality is the pursuit of money? Like a stew I once made in my ignorance, that tasted of absolutely nothing.. Or a dish where herbs and spices, each distinct and separate, mixed with a loving hand that will all blend together to make something greater than the sum of its parts?

Some good news trickling in on the funding side, which helps us face the new year! but nothing that can be announced publicly yet!
The fundraising efforts this term have brought in over a £1000 and more to come!
Most sessions finish next week: so we look forward to lots of mince pies, sparkly props and fun!
Main Company Christmas Party 12pm - 3pm at St Peter's Hall, Newlyn, on Friday 13th December.


Here we are about to launch our first Moving Words workshop !!!

It is an exciting and truly unknown voyage we are about to go on:
a real exploration and sharing of worlds....
I know i will be surprised and excited, as i am when faced with peoples creativity,

thankfully in the hands of experienced facilitators and writers with talented artists,
and the skills of BSL interpreter Debbie Harvey to help us through!
and Barbara Santi coming along to help participants give yet another creative and visual face to it all with film in each groups final weeks. 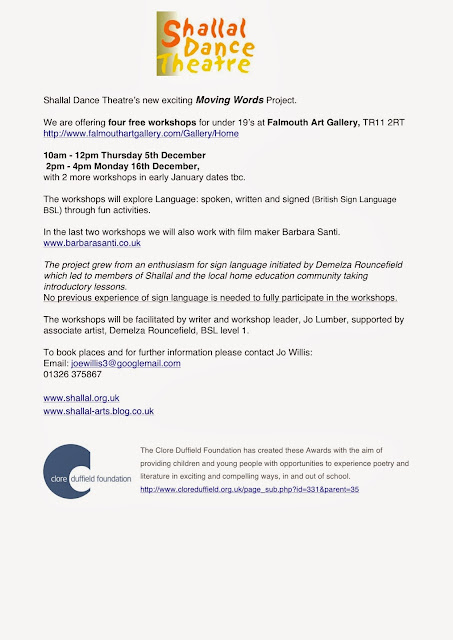 The New Year sees workshops within Nancalverne School and Shallal main company as well as with children who are deaf or hearing impaired.

Metaphor in Creative Sign Language Project
http://www.bristol.ac.uk/education/research/sites/micsl/
found this while searching for BSL poetry!
Posted by Shallal at 23:10 1 comment: